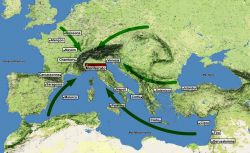 The Marchesi del Monferrato cultural society has been established in Alessandria on the 28th august 2004.
Its main task is to encourage and facilitate the exchange of knowledge and experience amongst every person or organization interested in the seven centuries long lasting history of the Marquisate, subsequently named Duchy, of Monferrato.
Nowadays the association represents the most important meeting point for researchers, fellows and institutions involved in the promotion and the sharing of the Marquisate of Monferrato historical experience.
The action of the Circolo is naturally not limited at the historical area of influence of the Marquisate, but want to spread and valorize the knowledge about this particular of the European history as example of european regional player.
Naturally another of the task of the association is to promote the knowledge about the Marquisate experience and history, not only toward researchers and institutions, but above all enlarging the number of people interested by facilitating the access to its documents and the its cultural heritage.
The association is committed in achieving its targets by organizing meetings (more than 180 since its establishment) and conversations with students and local communities, by organizing tourist routes and publishing books and reviews of its congressional activities and a bimonthly gazette, sent to hundreds of associates and partners.
The association has its own internet site – http://www.marchesimonferrato.com/ – a real source of information about the history of the Marquisate and the association activities and members.
As the old Marquisate had done in its old history, the association wants to create a network of partnership throughout Europe with other cultural association or institution, in order to expand its promotion action beyond the regional and national borders and to widen the awareness of the heritage and the key role of the Marquisate in European History in the past centuries. 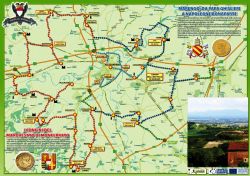